The technology of fire detection systems in tunnels has been developed, and still is developing in the world, particularly in mass transit in tunnels – a technology that is supposed to address a mass evacuation during an emergency event, along with written standards, instructions and recommendations in accordance with technological development and based on the experience of emergency events that had happened in tunnels in the past.

All over the world, underground transportation is increasing, in particular within cities and we are aware of the construction of many tunnels and underground railway stations (trains and metro) all over.

The growing concern about safety in underground transportation systems, exacerbated by recent occurrences of accidents in metro tunnels and train tunnels at a worldwide level, represents a great safety challenge to most of the metro and railway systems and a need to detect fire signals as early as possible.

Early fire detection on a train inside a tunnel is important to bring the passengers safely to their destination.

Therefore, early detection of a fire on a moving train in tunnel, especially before the train stops at an underground station is important for safety reason and it is a critical system that activates (triggers) all other safety systems in case of an emergency event, than it must be more than a sophisticated system that can survive in a harsh environment, detect real alarm and prevent unwanted false alarms.

Moreover, the importance of fire detection systems is critical to carry out a quick and efficient evacuation in order to minimize loss of life.

The goal is to provide the passengers with immediate information (visual and audio) during an emergency event, that will enable them to evacuate quickly and safely from the train to protected areas while allowing operators to handle the event.

Considering that a train usually carries over 1000 passengers in a number of cars.

In order to provide safety for underground transport, different types of equipment are used to allow better supervision and control of the various events that may occur during its operation. Fire detection is the important one, which in metro and railway tunnels may be considered as a complex and challenging issue.

Fire detection on moving trains in tunnels is more complicated inside the tunnel itself. For some reason:

• Fire detection due to the train's speed

• Quality and reliability of the detection system

There are three (3) options of fire detection on moving trains in tunnels.

1. Fire detection in the train itself

2. Fire detection outside the train at the top of the tunnel

3. Fire detection below a moving train

1. In the train itself

2. Fire detection inside the tunnel – at the top of tunnel (see figure 1)

3. Fire detection below the train (recommended before the train stop at underground station)

** High Sensitivity Smoke Detection (HSSD) systems are used in active fire protection, consisting of a central detection unit which draws air through a network of pipes to detect smoke. The sampling chamber is based on a laser that detects the presence of smoke particles in air by detecting the light scattered by them in the chamber. HSSD can typically detect smoke before it is visible to the naked eye.

The response time to generate alarm event depends on fire size in tunnel. The standards to trigger an alarm at load fire of 5MW are up to 60 sec at wind speed of 3 m/sec.

**** The thermal camera is an intelligent sensor which uses thermal and visual imaging for advanced fire detection, occupancy detection and CCTV. 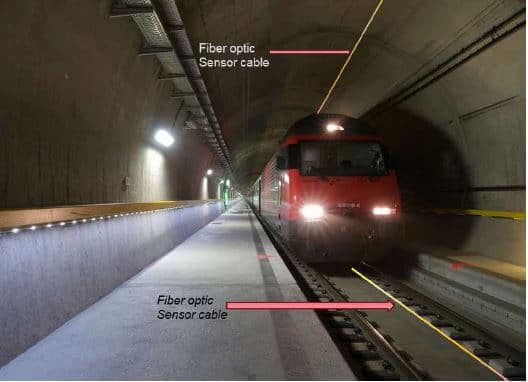 Fire detection technology that exists today covers the fire detection requirements fairly well in the train itself and in the tunnels. However, the ability to detect fire under a moving train is just as important, as the train proceeds to the underground station.

How to detect fire below the moving train?

Let's say a train with 1000 passengers inside it enters an underground station and under the train a fire is detected.

If so, what are the technological means to detect fire under a moving train in a tunnel?
To answer this question, consider what should be the parameters of choosing the best detection system that exists today:

• Speed of the train on that location

• How long it will take for the train to stop

• What is the minimum time to give notice of evacuation at the station?

• What is the best way to provide a reliable fire detection solution?

How long does it take a train to stop ?

The train moves around 50 miles per hour (80 Km/hr.) on that point, and it will take around 3 minutes to stop at the platform.

Note: the data collected from Jerusalem main underground train station, the station is 80 meters underground and connects via 2.5 kilometer tunnel.

Therefore, based on this data we can estimate that 2 Km from the station will be good enough to locate the fire detecting point (check point). And it will be enough time (3 minutes) to start the evacuation procedures at the station, automatically or by the operator.

Two types of flame and thermal detectors could be used at the check point from both sides of the tunnel (see figure 2).

In addition, should be used a fiber optic sensor cable at the railway itself along the tunnel. 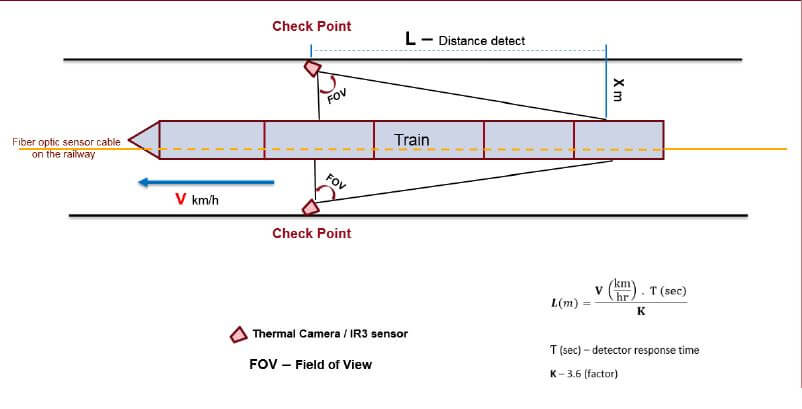 To cover all options of fire detection on moving trains in tunnels, it is important to consider all fire detection aspects in order to minimize loss of life.